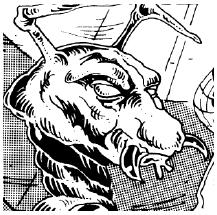 Comprehension:15%.
Ambidextrous: Can use either hand equally well.

Tichat-ka is one strange bug.

He only wears black, and thinks he's jinxed if he doesn't. He is riddled with the need to organize everything around him. Despite all this, he's not a control freak. If not allowed to clean or organize, he doesn't demand it he simply acts mousy and uncomfortable in the disorganization.

Tichat-ka is quite fond of adventure. To him, seeking out the unknown and understanding it is a form of organizing the universe - something he thinks is quite necessary.

Few people understand how Tichat-ka thinks, but few can argue with the results he produces. He's an excellent troubleshooter who seeks out new uses for skills that others wouldn't find uses for. He seems to understand things even when they are impossible to grasp. But when faced with something that is very simple, he tilts his head and clicks his mandibles in consternation - searching for the hidden complexity that he KNOWS is there. Eventually he finds it, or else it bothers him all day.

Born on a starship, Tichat-ka isn't sure who his father is. Could be any number of folks. But everyone treated him like a son anyway. He was babied a bit too long, and still looks for the comfort of a maternal figure when he's upset. He wears his heart on his sleeve.

Tichat-ka has a number of other strange compulsive needs - but they are impossible to list here. Observing his unusual activities typically clues someone in to the fact that he's a little off. But he's crazy in a way that yields insightful truths and unfathomable theories. He's crazy in a way that people sometimes need to be in order to turn abysmal defeat into surprising victory.

Some folks say it's all an act - to make people take pause and reconsider his actions. Some say it's us who apply the theories and results to his odd behavior and are fooled into seeing his insanity as genius. Whatever the case, it's best not to try to change his ways... just make sure your bet is with whatever side includes this odd being.

Tichat-ka is one strange bug.

NOTE: This character was made in accordance with rules provided for the online game found here.