Submitted By: Corvus on September 6, 2007
Yezha 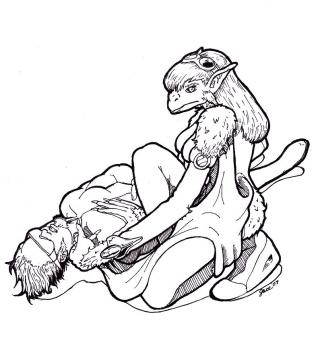 Battle Rage:5%.
Night Vision: But -15 to all actions in full light.
Gliding: Can glide 1m forward for each 1m dropped.

Yezha was born on Hentz (Araks III), the youngest daughter of a Templar of the ruling priest caste (see Star Frontiersman #2 [Mar. 2007]).  She was raised from the cradle to follow in her parents' footsteps.  She excelled in her theological studies, and her natural charm and beauty could dazzle even the most jaded of hearts.  When she came of age, Yezha's parents sent her to Onehome to finish her formal training, and that's when the troubles began.

While studying at seminary in Onehome, Yezha discovered she also had a natural talent for the arts of healing.  Fascinated by the connection between wellness of mind and spirit and wellness of the body, she took up medicine alongside her religious training.

It was in medical school that she met Gareth Tyln, the human son of a trader and one of the exceedingly tiny non-Yazirian minority on Hentz.  Gareth was a socially awkward young man who was being forced through medical school by his father.  His natural talents lent themselves better to music.  Yezha took pity upon Gareth and offered to tutor him, in exchange for him singing and playing for her.

Perhaps it was Yezha's relative naiveté and beauty; perhaps it was Gareth's music and loneliness; perhaps it was fate.  Yezha never expected that she could fall in love with a human, but she did, and Gareth was knocked completely head-over-heels in return.  For months no one suspected anything more than a scholarly relationship between the two of them, but then Gareth slipped and kissed her in public, and it was all over.

The scandal broke in the media the very same day.  The priesthood was furious, and the Tyln cartel were ruined on Hentz.  The cartel fled the planet in a single week, and Gareth barely survived an assassination attempt.  Yezha was summoned home by her father, but in a startling act of impulsive defiance, Yezha hid away in a Tyln cargo crate, not knowing where she might end up.

When she arrived in the Athor system eight days later, Yezha was near death from lack of food and water.  When her crate was opened up she was taken to a hospital, and during her recovery totally lost track of Gareth.  Under questioning she gave a false name.  With the skills she had learned back home she was able to get a job at the hospital and save up enough money to make transit to Prenglar, beginning her search for her lost love.  Her search is complicated by the fact that if she is discovered by agents of either the Family of One or the Tyln cartel, she could be in very grave danger indeed.

Yezha is a bright and brilliant young woman whose natural charm and empathy allow her to easily make friends, or lie with great success.  Her skills with interpersonal interaction supplement her training to make her an effective medic, and her natural impulse is to help anyone in need that she may encounter.  She is somewhat headstrong, believing that her success in school and in escaping her family are indications that she can achieve anything she puts her mind to -- and she's most likely right.  Everything Yezha does, she does to further her goal of finding Gareth, no matter the difficulty, but her priestly background and medical training have made her unwilling to kill.

Yezha is a stunning beauty with fine, pale golden hair and hypnotizing golden-green eyes, attractive not only to Yazirians but also to some humans.  She is somewhat shorter than average for an adult Yazirian (still a full two meters tall, towering over most humans) and a bit on the slender side.  She sometimes uses footwear with elevated heels to offset her below-average height.

She tends to dress in green and black accented with white, though she can often be seen wearing red jewels of various sorts.  Yezha has a penchant for wearing detached sleeves on her arms to match her body outfit, and occasionally adds gloves.  She is meticulous about caring for the hair on her head, much more so than a typical Yazirian (an affectation she picked up while dating Gareth).  When she can she keeps her goggles elevated, resting on her forehead rather than over her eyes.