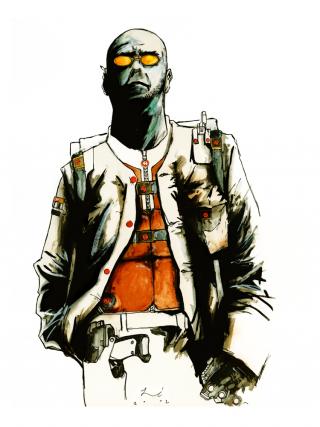 Tomm Gunn (certainly an alias) is ex-military, but no military he's able to admit to. He's been the chief military officer on board the pirate vessel the Raptor, a captured and converted heavy assault scout. His captain (the dread dralasite pirate Roonuk-Yore) and he have been long friends since their early military days.

Tomm doesn't care about good or evil. He thinks such concepts are absurd. He lives in the here and now, siezing the moment because it's not going to sieze him. He believes the Frontier is his for the taking, and at the moment the easiest path to taking what he wants is to be allied with Roonuk-Yore. Tomorrow, who knows?