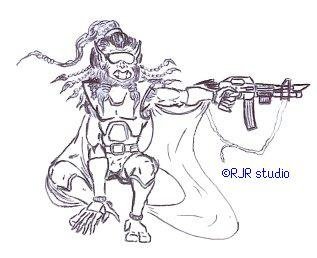 Battle Rage:25%.
Night Vision: But -15 to all actions in full light.
Gliding: Can glide 1m forward for each 1m dropped.

The father of my blood brother John (Steven Knightrazor) rescued me from a scout ship that I was aboard with my parents. Wanna make somethin' of it?! I was the sole survivor of that Hepplewhite Inc. disaster, and if I learned anything from it, it would have to be a distrust for any large business organization...my family learned the hard way that they're not above cutting costs despite the risk of their personnel.

I was placed in the care of Yast's Pasamorian clan along with John and we grew up together. I eventually grew tiresome of my childhood nickname of "Rinny", in fact John's the only one I allow the use of said moniker. But it gets my blood boilin' when someone I don't know drops it...you've been warned! I'm every bit of the thrill seeker as my human blood brother, although some claim I'm more of a down to earth type and that I'm the only voice of reason that John will listen to. My studies in the fields of all things technical have allowed John to develope his mutated energy manipulation ability. But we still have a way to go towards complete mastery of it, I'm constantly researching new experiments for him to try out, oftentimes to the dismay of any onlookers...hey a yaz needs to have some form of entertainment, right?

I once co-piloted the SS Knight Owl with John, although my primary job was serving as the ship's chief engineer. We served together for a tour with the Star Fighter Corps before that, having learned our trades. We later took a stint with the Clarion Royal Marines serving aboard the Osprey, although it's something John doesn't like to talk about. He had a thing for the ship's Junior Lieutenant gunnerette...anyways I was pretty stoked with that run as a spacer aboard the small freight hauler, although I wasn't too keen with the thought of a contract with a mega corporation. Even though I was always lookin' over my shoulder for something awry, we lived well for a while under that charter.

All that changed when John and I selected General Yan-Soon as our mutual life enemy after SDA forces ransacked our homeport in Histran. John tells the story better than I do, he can really bend your ear if you buy him a frosty yazirian ale or two. Sadly this vendetta ultimately resulted in the loss of our beloved ship, although I heard it was eventually salvaged and rechristened as the SS Corona Phoenix. I believe it's even serving a second ownership under that name, good to know that fine craft is providing for someone somewhere.

As for me, I'm currently in hiding with a group of UPF Loyalists, patiently waiting for an opportunity to spring out and wrest control of the Frontier back from our mutual life enemy. Now if you go tellin' any SDA regulars about that last bit, I'll personally hand you a selection of your vital organs in alphabetical order...