Submitted By: CleanCutRogue on December 3, 2007
Dargan 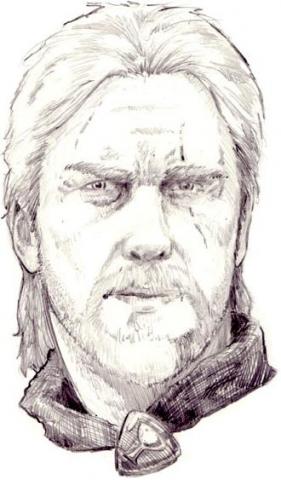 Dargan was born on a remote world.  He doesn't talk much about it, but what little others have learned of him, it was a rough frontier outpost.  Life between the settled locations on the outpost was rich with wildlife.  To keep peace, the local government formed a group of law men later known as Steel Trenchcoats (after the unusual skeinsuit they wore, a long duster inlayed with skeinweave).  The Steel Trenchcoats gained their own independance as a governing body over time, and usurped local power away from the elected officials.  The leaders of this group then controlled the outpost with fear, making people who didn't agree with their ideals "disappear".

Dargan was an integral part of the resistance that fought against the Trenchcoats.  Underequipped and outnumbered, the resistance fought valiantly but were seldom successful.  All weapons were in the hands of the law men - Dargan and his cause were powerless!

When he fell in love and was wed to a woman from the resistance, he moved outside the outposts and tried to live in the wilderness with a handful of loyal followers.  But the 'Coats found him and the battle was swift and deadly.  The entire slaying was recorded on holovid and displayed to others as an example of what the 'Coats would do to any further resistance attempts.  Dargan watched his wife and friends killed while he was held by tangler strands.

Before the tangler strands wore off, they placed Dargan in a steel cage.  He was locked up in this manner for over a year, with the holographic projection of the slaughter of his wife and friends playing in an endless loop.  He was fed and allowed to sleep, but each morning would awaken to the endless looping.

A year ago, Star Law came and took care of the Steel Trenchcoats, giving the outpost back to its people.  They rescued Dargan and gave him passage out of that place, to get away from the bad memories.  After much counseling, he was able to once again join a cause.

Dargan now works for the UPF.  He does whatever he's ordered to do as long as it agrees with his conscience.  So far so good.  He looks for corruption and brings it to its knees.

His laser pistol has the name of his dead wife etched along its length: RAHNE.  When his superior officers complained that this isn't standard protocol and wanted it removed, Dargan's counselors gave special permission to this small amount of personalization of UPF equipment.