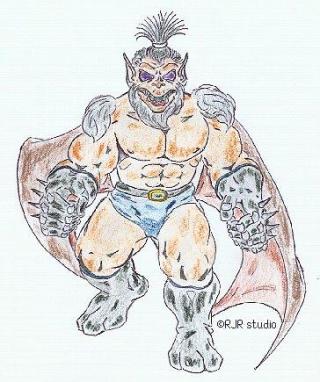 Battle Rage:40%.
Night Vision: But -15 to all actions in full light.
Gliding: Can glide 1m forward for each 1m dropped.

Khan-Gha was born and raised on a high grav world whose gravity eventually sucked the life from his natural parents, who were part of an exploration team that was surveying the world for possible UPF development. As a result, he naturally adapted and his Yazirian features became awkwardly extreme...he towers at 2.4 meters and tips the scales at a whopping 145 kilograms! His large bone structure and body mass have rendered his flaps useless for gliding, which was something even a normal Yazirian would be incapable of on this high grav world.

Eventually Khan-gha would return to Frontier society as a young adult, looking to make his way in life. With a tough as nails attitude, Khan-Gha soon found a career as an enforcer quite rewarding. Working various odd jobs as a security guard, skip tracer, bouncer, and even as a hired gun, he acquired many useful trades to expand that career upon.

Many of his coworkers and associates over the years have tagged him as the "ultimate yazirian", due to his towering height, muscle structure, and combat prowess. He is not one to cross, but is very warm and friendly to those he finds loyalty toward.