Submitted By: Shadow Shack on November 2, 2007
Eric "the Mouse" Stromm 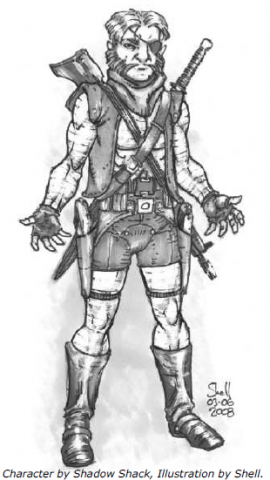 The dwarvish Eric "the Mouse" Stromm is often initially confused by others with the recently discovered race of Ifshnits, but his lack of body hair and gravelly low pitched voice quickly dispel that confusion. Being such a misfit landed Eric in trouble many times in the course of life. So it was a no-brainer that once he started getting involved with hovercycling that he would inevitably become involved with the seedy groups that ride them. He was eventually prospected into the Stellar Demons hovercycle club, becoming a full fledged member within another year (it was during that time he lost his left eye, punctured in bar fight). He became popular with the group, since his smaller stature allowed him to access the tighter quarters when it came to wrenching on those mean hoversleds.

One thing about Stromm, he loved hoverbikes. He was constantly altering and improving his bike and those belonging to his friends that rode with him. He travelled across the Frontier as a nomadic member of the Stellar Demons, never settling down with one chapter. As such, many of the parts he would add to his and the fellow members' rides typically hailed from other bikes. Being short and speedy made thievery a simple chore, and after a while he became familiar with chop shops and black market fencing of stolen hovercycles and their respective parts.

Late last year, this line of work landed him in the hot seat. He pinched 17 bikes over the course of one night and hid them in a warehouse facility, within the week he had all of them disassembled with their individual parts boxed up and ready for resale. Unfortunately those 17 bikes belonged to members of the dominant Palean club, the Zealous Zeroes of Point True. Not being a group of individuals that would report their rides stolen, instead they came down on the local Stellar Demons clubhouse and began a bloody war. Local law enforcement, with the aid of Star law, eventually discovered the reason for this war despite the numerous SD members that didn't seem to know anything about Stromm or his illustrious activities. The goods were eventually discovered during a city-wide search of Point True, and Stromm was about to go up the river.

Meanwhile the Zeroes were content with having their property returned, although reassembly was on their shoulders. Eric's court hearing faired well, all things considered, he landed 8 months of hard time for a charge that could have easily stretched out to upwards of 1-5 years per incident. Alas, he learned the art of thrown and hand weapons while in the big house, so his release back into society has made him a better man when things get down and dirty.

He is currently attempting to raise some capital to get his pair of hovercycles out of impound: a fully customized Pan Galactixon old school bobber and a heavily modified Sizuxi GSX900R. However, with the Zealous Zeroes looking for him, acquiring suitable ordinance took priority. He rationed off his belongings and took what credit he had to his name and acquired some suitable weaponry and a skeinsuit. Desparate for cash, he is taking on any and every job that comes his way, and being an ex-con those are few and far between.

Which brings him to present day status. This recently announced expedition to a newly discovered planet inthe Xagyg Dust Nebula could be his ticket. Not only should it pay well, but he'd be far away from Pale and the Zeroes that are gunning for him. This promises to be a profitable yet well deserved vacation.